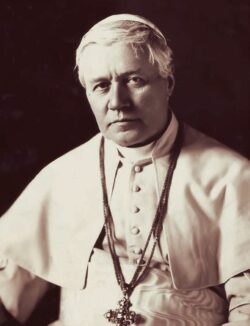 The Church was suffering through difficult times: relations with the Italian State were strained. How to respond to this? Pius IX had been reluctant, Leo XIII had tried to reach an agreement. Peter’s Barque, however, would be governed by holy and pious hands.

Newsroom (23/08/2021 22:32, Gaudium Press) The second half of the nineteenth century forever marked the pages of European history, especially for Italy. The consequence  of the Italian unification was the loss of the Papal States, (1870) and a break in the relations of the Church with the Italian State.

The Church at the dawn of the 20th century

In more than half a century of history, there were only two pontificates: those of Pius IX and Leo XIII.

While it is true that Giovanni Mastai Ferretti and Vincenzo Pecci were almost equal in terms of the length of time they reigned on the Throne of St Peter, it is also true that they differed considerably in terms of the policy they exercised towards the Italian Government.

Pius IX, an energetic and assertive character, consistently maintained strained relations with the Italian State. Regarding it as a usurper, he considered himself a prisoner of the Government. Excommunications and interdicts rang out…[1]

Leo XIII, on the other hand – making use of his conciliatory talent – worked diplomatically in an attitude of frank understanding towards the civil authorities. Using his fine tact and sensitivity, Pecci ensured that Vatican diplomacy engaged in a dialogue of equals with the Italian State.[2]

An Italian journalist of the time wrote that “If Pius IX, the uncompromising, the plunderer, had suspected that, against his wishes and his measures, the Cardinal-Bishop of Perugia would be his successor to the Pontificate, he would have excommunicated him so that he could not be elected.”[3]

It was against this background that, in August of 1903, the College of Cardinals met to elect Leo XIII’s successor. How great must be the moral stature of this Prelate!

What, however, was his political orientation? Liberal? Conservative? Would he try to reach an agreement, or would he be recalcitrant against political resolutions?

Only time would tell.

The politics of a Holy Pope

And the answer was not long in coming.

On the morning of 4 August, with more than two-thirds of the votes, Giuseppe Melchiorre Sarto was elected the 257th Pope of the Catholic Church.

Having been born in Riese, a small village in northern Italy, he stood out from an early age for his apostolic zeal. After years of ministry among the peasants, he was appointed Bishop of Mantua, and nine years later raised to the dignity of Cardinal-Patriarch of Venice.

Sarto had always maintained one obsession: all for the good of souls! Prompted by the same grace that had inspired the great missionaries, he did not hesitate to sacrifice himself for others. His goodness and generosity commanded respect even among his enemies!

What can be said of his humility? He was of such a calibre that, being in Rome for the Conclave of 1903, he had no pretensions of being elected. “I am a poor village Cardinal“, he said of himself.[4]

Then, the Conclave was over. The veto that Cardinal Rampolla had received – from Franz Joseph, Emperor of Austria – of the reluctance of Cardinal Sarto to accept the Pontificate, judging himself unworthy of it… all that was behind him now! “I accept the Pontificate as a Cross.”[5] It was time to arm himself for the battle that God had in store for him!

The expectations for the new Pontiff were great: what would be the program of his Pontificate? Would it be more like the intrepidity of Pius IX or the pacification of Leo XIII? When asked why he was taking so long to make a statement about it, St. Pius X simply replied: “Tell them that the Pope is praying.”[6] No discourse, no encyclical.

Why? Being very cautious, he was not given to rash haste, and above all, he was waiting for the right moment to act. The moment arrived!

With this declaration, the Pontiff broke the silence that had prevailed until then and made his intention clear: “We declare that in the exercise of the Pontificate we have but one purpose: ‘To renew all things in Christ’ (Eph 1:10).”[7]

Taking the words of the Apostle as his motto, Saint Pius X looked beyond the purely political problems and shed light on the root of all the dissolutions existing at the beginning of the twentieth century: “You understand, Venerable Brothers, what this infirmity is: the abandonment and refusal of God, with which ruin is inexorably associated, according to the words of the Prophet: ‘Behold, those who depart from You will perish.’ (Ps 72:27)”[8]

The plan was set. Rather than avoiding local dissension, it was necessary to strive to bring humanity closer to God. How could this be done?
The Supreme Pontiff delivered important recommendations: the first was to revive the image of the true God for men: “A most just Judge who punishes the guilty and rewards virtue.”[9]

In addition, the discipline of the Church – of Holy Mother Church – needed to be renewed so that it would lead mankind to Christ, and from Christ to God. Such a renewal would be impossible without skillful instruments prepared for the task. And so the Holy Father concluded: “Venerable Brothers, how much effort you must put into the formation of the clergy for holiness!”

In the eleven years of his Pontificate, Pope Sarto would show evidence of his true and pure love for the Church. The renewal he desired was – first of all – lived by him. This is why historians agree in considering his Pontificate as one of the most fruitful and renewing in history.[11]

Where will the restoration come from?

“History is the teacher of life,” says the adage. It is through the lessons of the past that one lives the present and, above all, has hope for the future.

Is not the history of the Church today similar to that of the beginning of the 20th century?

Is there peace? Is there harmony between Church and State? Do men and women have a closer relationship with God or do they live as if He did not exist?

It is not even necessary to speak of the upheavals that assail humanity and the Church today… who cannot see the need for a restoration? A true restoration of the Church, of the world, and mankind.

Again, where does restoration come from?

Once again it becomes necessary to return our gaze to history!

Restoration does not come from political maneuvers alone, nor even from diplomatic agreements or imperative or hostile attitudes. It comes only from turning to our Lord Jesus Christ, with filial piety and true holiness.

To know where true restoration will come from, it is enough to seek among men the one who, like a new Pius X, will call mankind to true holiness at the feet of Christ and Mary.

Who will he be? Surely, a Saint!

So that, once again, the Church will rest in holy and pious hands!

Communion and Liberation commissariat, one more in a long list …

The Ferocious Wolf Which Stands Between Liberty and the Guillotine

12 Reasons to Increase your Mass Attendance

The Situation of Christians in Iraq and Lebanon