Cornelius, which means “strong as a horn,” suffered martyrdom when he became Pope in 253, under the rule of Emperor Decius. 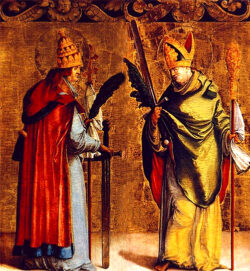 Newsroom (September 16, 2020, 7:32 pm Gaudium Press) — St. Cornelius and St. Cyprian, both role models of confessors of the faith, to the point of martyrdom, are our saints today. Cornelius, which means “strong as a horn,” suffered martyrdom when he became Pope in 253, under the rule of Emperor Decius.

In its twenty centuries of existence, the Church has seen almost all its prerogatives attacked. Cornelius had to confront the heretical Novatian, who denied the power of the Church to forgive sins and said that whoever denied the faith could no longer be readmitted into the Church again. He also claimed that sins of impurity, fornication, and adultery could never be forgiven.

Novatian presented himself as a purist of the faith, “more papal than the Pope,” one would say today, hiding a veiled pride behind a doctrine that was very harmful to the Christians of that time. Why?

Because of the persecutions, many denied the faith. But later, having repented, they wanted to return, and the Novatian principles prevented them from doing so.

Pope Cornelius, confirming the true doctrine, pointed out that sincere repentance added to the power of God’s minister, obtained forgiveness of sins, even the sin of apostasy. In this – as in many other matters – he was supported by St. Cyprian, Bishop.

Decius stepped up the persecution and exiled Pope Cornelius to Centumcellae. A letter arrived from the Bishop of Carthage, St. Cyprian, who congratulated the Roman Pontiff because he received the grace to suffer for Christ and his Church.

St. Cyprian, Bishop of Carthage, in North Africa, was fundamental in consolidating Christianity in that part of the world.

But persecution also reached him, first by Emperor Decius, and later by Valerian.

They exiled him to Curubis until the pro-Consul Maximus ordered St Cyprian to give up the faith. Since Saint Cyprian remained firm and did not worship pagan gods (who were demons), Maximus ordered his beheading.

Saint Andrew the Apostle and his Last Prayer