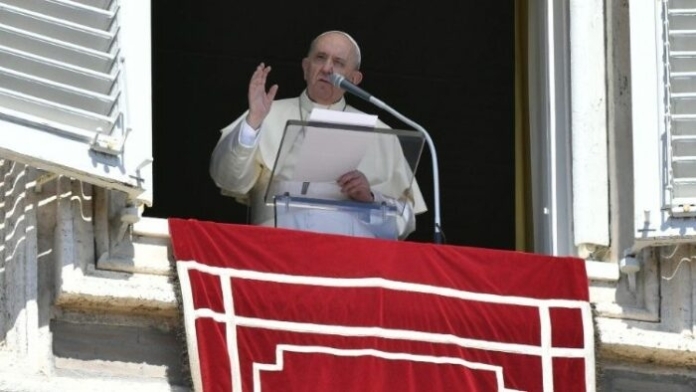 The Pontiff warned that we must be careful not to be good only on the outside, neglecting to purify our hearts.

Neewsroom (30/08/2021 16:26, Gaudium Press) Last Sunday, 29 August, during the recitation of the Angelus in St. Peter’s Square, Pope Francis commented on the Gospel of the day, stressing that the Lord’s action is fundamentally that of wanting to return the Faith to its centre.

The Gospel of St Mark the Apostle exposes some Pharisees scandalised because the Lord allowed the apostles to eat with ‘unclean’ hands, not following the tradition of washing them. Our Lord refers to them as hypocrites, as representatives of a heart that ‘honours with its lips’ but whose heart is far from God.

“It is the risk of a religiosity of appearance: to appear to be good on the outside, neglecting to purify the heart. There is always the temptation to ‘fix God’ with some external devotion, but Jesus is not content with this worship. He does not want the external, he wants a Faith that reaches the heart,” Francis said in this regard.

In the Gospel, Jesus tells the crowd that “there is nothing outside man which, entering him, makes him unclean” and that, on the contrary, it is “from within, from the heart” that evil things are born, the Pontiff added:

“These words,” the Holy Father commented, “are revolutionary, because in the mentality of the time it was thought that certain foods or external contacts made the person impure. Jesus reverses the perspective: what comes from outside is not bad, but what is born from inside.

To overcome evil, you must first defeat it within yourself

But we also tend to think “that evil comes mainly from outside: from the behaviour of others, from those who think badly of us, from society. How often we blame others, society, the world, for everything that happens to us! The blame is always ‘others’: the people, the rulers, bad luck”, the Pope said.

Pope Francis invited us to ask the Lord “to free us from blaming others. And that we ask “the grace not to waste time contaminating the world with complaints, because this is not Christian. Instead, Jesus invites us to look at life and the world with our heart. If we look inside, we will find almost everything we hate outside”.

If we “sincerely ask God to purify our hearts,” we will begin to “make the world cleaner. Because there is an infallible way to defeat evil: begin by defeating it within ourselves,” he concluded. (EPC)

The Pope to the Prelate of Opus Dei: Be Faithful to the Founding Spirit